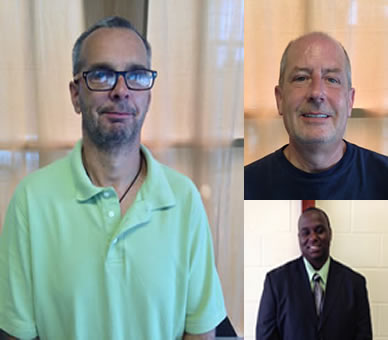 Over the last several months there have been three graduates from The 180 Center eighteen month Christian Discipleship training program. There lives have been changed forever.

My name is Jon Ecker. I entered my first rehab in 1990. I spent 18 years in 12 step recovery, and even became a registered substance abuse counselor in Maine. Over the years I experienced the pain of divorce, battled cancer, PTSD, and mental disorders. It was during a ten month stay at the Salvation Army that I first saw Jesus in a dream. I went on to help manage sober houses. Still, after two stays at Yale Psychiatric Hospital, three suicide attempts, and homelessness; I was spiritually, physically, and emotionally spent. I ended up at the men’s shelter in New Haven. In July of 2013, I entered The 180 Center and made a commitment to the eighteen month discipleship program. I graduated the program in January of 2015; in addition, by the grace of God, I was able to stop the use of methadone and quit smoking. I now serve as the Co-Director of sober housing.

When I came to The 180 Center, I didn’t love anyone. I experienced pain in my life when I lost loved ones and when I went to jail. I had a lot of anger; I was mad at many people, including myself. I was at the men’s shelter in New Haven when I discovered a place to get a free cup of coffee down the street. I entered The 180 Center eighteen month discipleship program in the summer of 2013; in January of 2015 I graduated the program. I have seen my life change because of my relationship with God. Today I have a love for people, and I understand God’s love for me. I manage a sober house and love helping people. I know God is looking over me; now I am a man of God.

I am 20 years old and graduated from Branford High School in 2012. My motivation was always to gain success and power. I was driven by anger, and it was my downfall. I was kicked out of my house in May of 2013; I went from living with a neighbor at first, then I moved into the men’s shelter in New Haven. In 2013, I committed to The 180 Center eighteen month discipleship program and rediscovered a relationship with my Lord and Savior, Jesus Christ. The Lord has blessed me with the restoration of my family and deliverance from anger. Most importantly, I now realize the love the Lord has for me. In March of 2015, I graduated from the program. My life will never be the same again! The Lord has saved me and called me to be His disciple. Thank you, Jesus!

Happy Fall! As seasons change, we would like to share a big change that has taken place in our

Community Care Day was canceled twice because of bad weather forecasts, but we had a great turn

After several months, we finally received our permit and now will be moving ahead with renovatio

We are praying and hoping that you are all doing well. We wanted to share some GOOD news with you

There is still so much going on in the world around us. It is sobering, but it serves as a great